09 NOVEMBER 2004 One American was killed in action when his motorcade was hit by an RPG near Ramadi.
✞ David Randolph, 34 (EODT)

Greene County Sheriff Steve Burns said on Friday afternoon that the family of David Randolph received word this morning that the 33-year-old Chuckey-Doak High School graduate had been killed. David’s father, James “Buddy” Randolph, is a detective sergeant with the Sheriff’s Department.  He was in the lead vehicle of a convoy that took an RPG hit, also killing Aaron Iversen, another American contractor.

David Randolph was working for EOD Technology Inc., Sheriff Burns said. The company, based in Lenoir City, is described on its Web site as specializing in “munitions support and security services for the U.S. Military and the Project and Contracting Office in Iraq.” Randolph also had worked in Iraq for Blackwater USA, a North Carolina-based security firm. He had said he started working for Blackwater USA in January after leaving a job as a K-9 officer with the Horry County, South Carolina, Police Department.

Randolph was graduated from Chuckey-Doak High School in 1988, served in the U.S. Marine Corps, and helped protect President George H.W. Bush on his visits to Camp David, Md., from 1990 through 1993. He also worked for the Conway, South Carolina, Police Department, had organized that department’s SWAT team several years earlier. Randolph also served with the South Carolina National Guard.

CONWAY, S.C. – A gray sky accentuated the mood of the hundreds of friends and family members who gathered Monday at Maple Baptist Church to say goodbye to 34-year-old David Randolph, the former Horry County,South Carolina, police officer who was killed in Iraq Nov. 12. The church was a sea of blue, gray and green as city and county police officers, Marines and National Guardsmen filled the church to sound of “America The Beautiful.” Pallbearers at the church included Randolph’s fellow police officers.

The Rev. Gary Reeves and the Rev. Al Allen performed the funeral ceremony. “A patriot, it is said, is a person who loves and defends his country,” said the Rev. Al Allen. “I’m so thankful that there are still a few men in this great country who know what that word means. David James Randolph was such a man.” 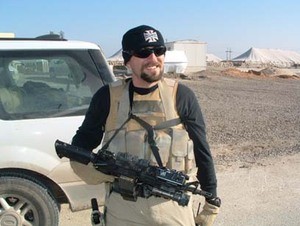 Chapter 5 – And The Hits Just Keep On Coming

I had begun the email to my brother Brad by writing, “God (or some higher power) was definitely looking out for me yesterday.” His reply was straight out of the Bible, “Dude, there is no higher power!” The point is that there really is no higher authority than God. I had made that comment in my email in much the same vein that many of us do when we are spared some painful experience and utter the words, “Someone up there must be looking out for me.” That “someone up there” is God; He is always looking out for us. Have you ever thought that the day you were late for work or had to stay late, God just might have saved you from being involved in a car crash? It is the miracles that we never know about that should cause us to get on our knees and thank God for His saving grace. ~ Wayne E. Hunt